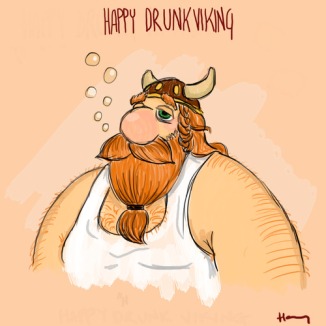 27. Worst misconception about this deity that you have encountered.  I’m not so sure if this is a misconception specific to Wayland, but in general amongst Heathens/Asatru, there seems to be this “flavor” to the gods, that they are all loud-boasting, hard-drinking, frat boys.

Not so much for Wayland, at least in my experience. He’s more of a brooder, and speaks rarely unless it’s for a very specific purpose. To say he’s not a chatterbox is a gross understatement. Wayland is also a huge fan of self-discipline and control, so drunkenness? Yeah, not so much.

Wayland is also not just an artisan: he’s a master strategist. He plotted his revenge for years, patiently waiting for the right moment. He definitely knows how to play the long game, and if restraint is called for, then he has it in spades.

Most gods have their dark places. Sometimes apologists attempt to fill those crevasses with concrete, and polish the surface until the myth resembles a marble statue instead of a living deity. Wayland’s myth, for good or ill has resisted that, allowing those of us who work with him still to explore all his qualities, not just the pretty or popular ones.