July has been a rather magical month all the way around.  It’s easy to find components this time of year in New England. It seems like they’re veritably bursting out of the earth.

First, I gathered some lavender for a house blessing that our Grove performed for one of our members. It was a wonderful ritual, with much drumming, smudging, food, and song.  Not much surprise on the last two as this was the residence of a bard par excellence!

The next bit of magic I concocted was for cleansing, warding, and brightening my dwelling space. I had been going through a particularly rough patch with the community, and needed a little extra boost to feel safe in my own space. This was a mix of nettle and raspberry for protection, and dandelion and ginger for cleansing/enlivening. Worked pretty darned well, if you ask me. 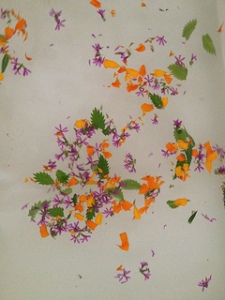 Before I had a particularly difficult meeting, I took a lustral bath with agrimony, loosestrife, and marigold.  Smelled great and acted as the perfect relaxer.

Last bit of spooky-fu this month was a lucky frog for a neighbor.  She’s usually focused on banishing things, but if you don’t fill the void with something good, you’re just going to end up in the same place.  Since I have a soft spot for frogs and tend to think killing them in the name of a spell is bad juju for the health of your garden, I’ve started making origami frogs instead. Still effective in my experience, with without taking away a valuable predator from my veggies and herbs.

2 thoughts on “Magic in July”