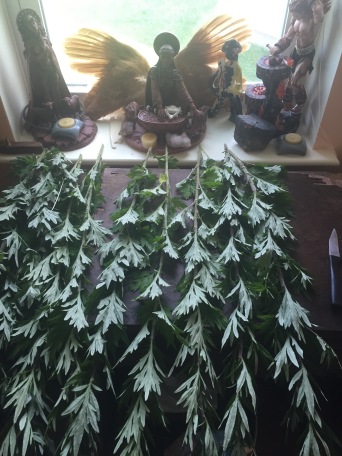 Midsummer is really the beginning of summer here in central Massachusetts.  We are about six weeks off from the traditional British harvest holidays, with the cross quarter fire festivals marking the height of each season rather than its beginning. At least that’s been my experience.

There are a number of sacred herbs that can be harvested from my land. Midsummer seemed like a good time to accomplish this, but I also wanted to incorporate some lunar correspondences. The Full Moon was in Capricorn just after Midsummer, which traditionally is a time where  pruning, or harvesting, is done to promote more vigorous growth in the plant. (Although why I would want this for the Mugwort is beyond me.)

And then it rained on the day of the full moon. All my lovely plans were foiled.

So, I went out the next morning, which was still within 12 hours of the moment of the Full Moon. It was the hour of Venus on a Thursday, the day of Jupiter, both of which should be auspicious for harvesting healing herbs. I managed to bring in the Motherwort, Agrimony, and Mugwort then. For future reference, I will be harvesting Motherwort much sooner next year, as it’s seedpods are very sharp and spiky. 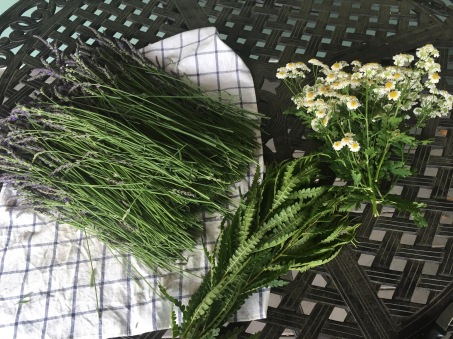 Unfortunately I had to complete my harvest in the afternoon, which is when the essential oil concentrations are the lowest. On the “bright” side (ha!) this was now during the hour of the Sun and I brought in Sweetfern, Lavender, and Feverfew.

I had spied a glorious Yarrow by the side of the road earlier that morning. Sadly, someone mowed it down between that time and when I went out in the afternoon to harvested. I was really cheesed off. I did find a couple of other smaller sprigs though, and I’ll see what wild crafting I can do down in the conservation land for this little herb.

I’ll likely be doing another round of harvesting during the Dark Moon, especially for Mugwort (and probably the Agrimony as well, just because I don’t want it going to seed). I’ll probably wait until the next Full Moon for the rest of my culinary herbs like Sage and Oregano.  But for now, it looks like a goodly supply drying on the walls of my kitchen! 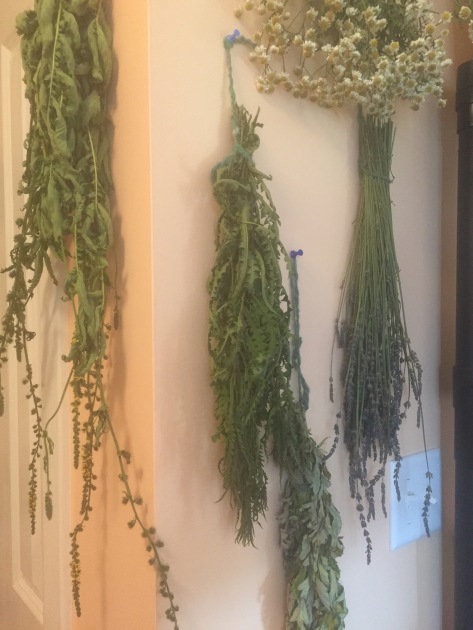 One thought on “Taking in the Midsummer Harvest”