Back and Crafting Again

Yes, my eyes are closed. It was a meditation fer cryin’ out loud!

Even though the second annual OBOD East Coast Gathering has been a week past, it’s still very strong in my mind. The week before was pretty much consumed with making my robes, which my grove bro helped me finish at 3 AM the night before we left. (Of course, then I forgot the clasps and the grove banner, but happily my husband brought them with him when he came up the next day! What’s an event without a little last-minute sewing?)

The Gathering itself really hit its stride this year. It felt like the core group had really solidified, and that we were able to embrace guests and newcomers into our traditions. Now we were friends coming together, not just folks with similar interests seeking companionship.

The two guest-speakers were Philip Carr-Gomm, the Chosen Chief of OBOD, and John Michael Greer, the Grand Arch-Druid of AODA. It has long been a wish of mine to put these two men in the same room and be a fly on the wall during any following conversations. I more than got my wish! Hopefully their open discussion will be broadcast on an upcoming episode of DruidCast (available free on iTunes). Both gentlemen were approachable, eager to answer questions, and had an amazing depth of knowledge across a variety of subjects. 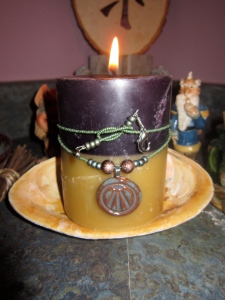 Beeswax equinox candle. It was supposed to be white and black, but yellow and purple seemed to work well enough! Necklace by Willowcrow.

In fact, JMG was able to answer a question that had been bugging me for nearly five years, namely why did the Golden Dawn change the correspondences from the traditional Hellenic Elements (Earth/West, Water/North)—used from  to what is so commonly used today in Neopagan circles (Earth/North, Water/West). It was apparently not, as some have suggested, a geographical change to better match Britain’s climate, but one based on the different elemental associations of the four Hebrew letters that comprised the name of god, Adonai. In hindsight it’s a little ridiculous how much this question was bothering me, but it’s so nice to have an answer other than “the Victorians are doin’ it wrong, again.” Now I feel like I can make an informed choice between the systems, and that’s a great weight relieved. 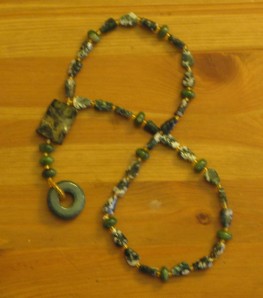 Meditation beads for the Chosen Chief.

We were then lucky enough to host the Carr-Gomms for our Alban Elued celebration back in Boston post-Gathering. We all brought gifts for a crane bag that we presented to the Chosen Chief and Scribe. My contribution was a glass spiral pendant on a silver chain, and a set of meditation beads. Meanwhile, between these, my robes, and pouring a candle for the ritual, I feel like I’ve gotten my crafting groove back. Fall is really a time of fruition in more ways than one for me; it feels like the long drought of summer has finally broken and awen is able to flow freely through me. 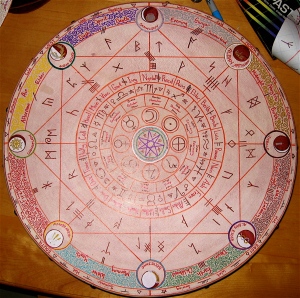 So, following on the heels of my Holy Days post, the major project that I’ve been putting together as a sort of finale for my work with the Boar Clan has been a map of sorts. It’s a temporal map, recording all the various ways I keep track of time throughout the Wheel of the Year. The base comes from John Michael Greer’s Druid Magic Handbook, but I’ve made several additions of my own as well.

As if there were any doubt about my own sycretic leanings, there are influences from:

…all these in addition to my own peculiar homegrown aesthetic. So yeah, there can be no doubt this is a syncretist’s drum!

Again, the 8 festival gates, the paths between them, and the associated ogham for each path come from the DMH. While I was doodling the overall plan, I was squirming that there didn’t seem to be a way to include the runes, which is the divination system I’ve always felt most comfortable with. There wasn’t a nice way to aesthetically place the runes on the paths along with the ogham, and even if I did try that, there would only be room for the Norse futhark, when I like using the whole 33 rune A-S set.

And this is where having an art brain can come in handy: I started looking at the negative space.

There are, in fact, 32 “empty spaces” defined by the paths of the Wheel of Life. Plus the center grove, this makes 33—the total number of A-S futhorc!

The next tricky bit was arranging them. Looking at the pattern, I could discern two interlocking squares of 8 spaces each, one for the solar gates and one for the cross quarters. Then there was an inner “ring” of 8, and and outer “ring” of 8. This happens to match up nicely with the 4 aetts of the futhorc.

The outermost ring I gave to Hel’s Aett, starting between Alban Arthan & Samhain, and going counter-clockwise. The catabolic cycle.

Tyr’s Aett or internal influences were placed around the cross quarters going counter clockwise from Samhain.

Lastly, Gar, as a kenning for the World Tree, was placed in the central grove as representing the Axis Mundi.

Do I think I’ve stumbled across some sort of long lost relationship between runes and ogham? Hell, no. But I do feel as if I’ve been given a gift, a way to acknowledge and celebrate both my Germanic and Celtic heritage though this map. The runes define the space between, leaving the direct flow and relationship of wyrd to be best described by the ogham fews.

The rest of the symbolism is much more straightforward, drawn largely from the various correspondence charts presented in the DMH and the OBOD Bardic grade material.

The outermost ring consists of the elements and their classical associations and symbols, along with the modern correlating ogham. The next ring depicts the 8 Holy Days, their colors, symbols, and associated moon phases. The lines connecting these stations are marked with their own ogham and the spaces between house the runes.

Next come the three “monthly” calendar rings: Graves’ Tree Calendar (yes, I know it’s completely made up—I happen to like it anyway), the Western Zodiac, and a mish-mash of agricultural names for the various moons that suit my bioregion and experience here in New England (drawn from these sites).

The inner circles consist of the planetary associations with the 8 Holy Days, the 3 Druidic levels of being, and the 7-pointed star which defines the Drudic spacial paradigm (4+2+1). Lastly, the ogham and runes associated with Spirit surround the star, which holds an Awen at its center.

Once I had all of this worked out on a full-sized paper pattern, it was time to transfer it all to the drum. The drum itself has an interesting history. It was given to me by one of the members of my first ADF grove when he moved his family to Oregon to grow pears. He was an interesting fellow, much more of a cultural Druid since he had converted from Paganism to Catholicism after marrying. But he was a wealth of knowledge, always tossing out riddles to the younger grove members: “Why do the dogs have red ears?” and “What can the ancestors use that we cannot?” I was really touched when he passed his drum on to me before he left. 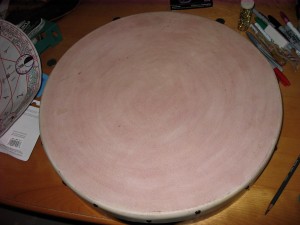 There are a number of traditions which “bloody” or “feed” an object in order to make an enchantment stick. For this project, it happened purely by accident when my husband spilled some port wine down the front of the skin. At first I was distraught, but then decided to make the best of it. I gave the surface three coats of port on the Solstice to prepare it for the work ahead.

After many Google search and much chewing of nails, I decided to use Sharpie markers for the design—and they’ve turned out to be a leatherworker’s best kept secret. There’s a much better degree of control than with dyes, and a wide color palette.

The next trick was transferring the pattern. I ended up destroying the paper template by cutting it apart with an exacto knife. I was too worried about my compas puncturing the drum head trying to recreate the circle by hand, so I decided to use the ones I had already drawn. The tracings did not come out perfectly, but then the drum isn’t perfectly round either, so a little fudge factor actually worked in my favor. 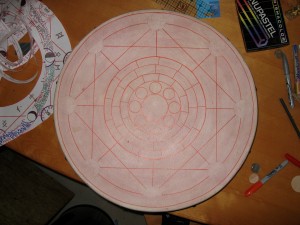 From there on out, it was a pretty straight case of filling in the details. The one other exciting part of the project was learning how to draw a nearly perfect septagram (or heptagram if you prefer) with a compas and ruler. It was both fun and challenging, and has reaffirmed my desire to put more effort into learning about sacred geometry—in my copious space time, of course.

I put the finishing touches on the design today, filling in the holiday associations with a airy/foliate pattern born from the throes of tedium of high school US history (you really never know when this sort of thing is going to come in handy). Tomorrow, I’ll use the drum to complete my final journey to the Boar Tribe.  I don’t know what will happen after that, but I do know that I’ve created something both necessary and beautiful. And I’m content with that.