5. Members of the family – genealogical connections. They say a picture is worth a thousand words. This is particularly true when it comes to Norse/Germanic genealogies!

Easiest to deal with are Wayland’s two brothers, Egil and Hla∂gu∂r. All three are sons of an otherwise unnamed “King of the Finns.” Egil has a relatively extensive mythology of his own as an archer par excellence. In some stories, he actually helps Wayland escape by shooting down birds for his brother so he can pluck their feathers to create the mechanical wings upon which he takes flight. Egil also has his own adventures with King Ni∂ud, wherein he is forced to shoot an apple off his son’s head (perhaps an inspiration for William Tell?). Hla∂gu∂r, on the otherhand, does not seem to have any other extant lore, though his name may translate as “beating-Finn,” which to me implies he wasn’t a slouch when it came to the martial arts.

Once we come to the Smith’s wives, things get a bit more complicated. Let’s start with his first wife, Hervör the Swan Maiden. She is in fact sister to Hlaðguðr, the wife of Wayland’s bother, Slagfi∂r. They are both daughters of King Hlödver. 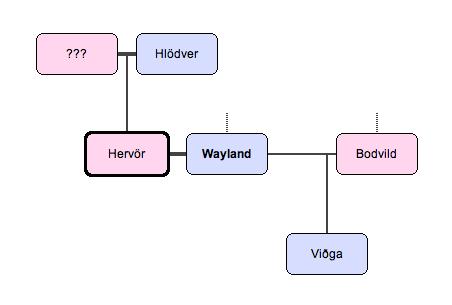 In one version of the story, she and Wayland have a son, Heime, but whatever version of the tale one reads, she always leaves the Smith, and sometimes her son as well. Her duties as a Valkyrie take her away from her family, and my own UPG says that this choice was not an easy one for her. Speaking from personal experience, leaving one’s child for work, even for a few days, is one of the most difficult things a mother can do. 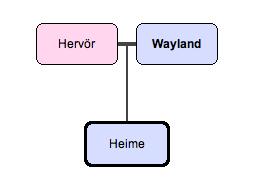 And then, there was Bodvild, the daughter of hamstring-happy King Ni∂ud, whom Wayland seduced/raped, depending on the story and the interpretation. The 13th century Þiðrekssaga gives a more complete (and more flattering) version of the tale, in which Wayland comes back after his escape to marry Bodvild, whose son is named Vi∂ga. She is also connected with a burial mound on the Berkshire Down (sadly since disappeared), which when excavated in 1850 yielded a jet ornament and a bronze pin among other finds. Some claim this as evidence that Bodvild was in fact a historical personage, but as much fun as this theory is, I find it more likely it was named after Bodvild because of its proximity to Wayland’s Smithy. 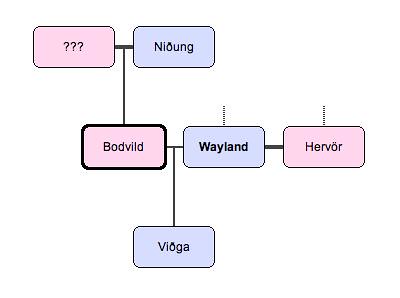