I was browsing through Sam Webster’s pieces at Patheos, and while reading his “Restoring Idolatry to Iconolotry” and discussion of zoomorphic icons, I remembered a curious little southern French town my family and I had visited when I was eight. What stuck in my memory was a rather unusual bust of a woman outside the tourism office.

A little bit of Google-fu led me to the name of that hot and sleepy village: La Romieu. We had made a day trip to the fortified town from stucco bungalows that were home to legions of sun-baked lizards. My father, a medieval historian, wanted to see the cloisters of St. Piere La Romieu (when abroad, we often tootled around the countryside and visited between four and six churches/cathedrals before lunch each day). I was steeling myself for yet another boring recitation of Romanesque architectural features when I spied the first stone cat, perched on a windowsill far above the street.

As it turned out, La Romieu was home to a fascinating legend, that of Angeline and her numerous felines. From Sejours-Anglais.com:

There’s a legend associated with the village which dates back to the 14th century. A forester and his wife (Vincent and Mariette) had a daughter, Angeline. Sadly, Angeline’s parents died when she was 3 years old, so she was cared for by a neighbor.

The years 1342 to 1344 were difficult for the village of La Romieu. Bad weather made it impossible to plant the crops and a great famine developed. To help feed themselves, the villagers resorted to eating cats.

Because Angeline adored cats, her adopted parents agreed that she could hide her two cats in the attic, letting them out to hunt only at night.

Unfortunately, with no cats, rats proliferated around the village. Once the crops had started to grow again, this plague of rats began to threaten the crops.

Eventually, Angeline’s two cats produced 20 kittens. When the villagers heard of this, it was decided that Angeline should release her cats and kittens into the fields. This she did.

The rats disappeared. The village was saved and the legend says that Angeline’s appearance gradually began to resemble that of a cat.

Much later, in the 20th century, hearing a woman recount this legend to her grandchildren, a sculptor, Maurice Serreau, started creating sculptures of cats which could adorn the buildings of the village. 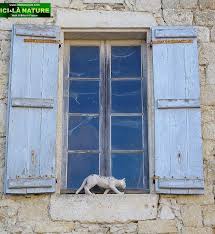 As I recall, the tour guide also told us that in addition to being spared from famine by the helpful cats, the town was also passed over by the Black Death that ravaged Europe between 1346 and 1353. At a time where cats were often vilified, Angeline created a haven for them, and in return the balance of the land was kept.

Now, I had initially remembered that Angeline had been made a saint, but this wasn’t the case. However, the conclusion is not entirely far-fetched: the base of her sculpture had several little stacks of francs around the edges–it’s not surprising that my eight-year-old’s mind would chalk the offerings up to being canonized. Whether these were placed there by locals or pilgrims is up to debate, but looking back at the experience through a polytheist/animist world view, Angeline seems to be one of those rare occurrences of spontaneous ancestor veneration under the nose of the church, even to the degree that I would argue that in modern times, she is becoming the embodiment of the genius loci, or spirit of place.

To tell the truth, I’m not quite sure why I was moved to recount this story. At the time I visited La Romieu, I actually thought I hated cats. Maybe it’s because my own felines have brought so much to my life. Maybe it’s because since then, I’ve discovered my family’s own crazy cat person, my Great Uncle Gerald, who fed and sheltered a feral colony in his barn. Yet there is something so charming and whimsical about a young girl who saved her community through her love of her cats. I fervently hope her tale continues to be told in La Romieu for the next seven centuries.