It’s a scary confession for a Druid to make, but I’ve not felt at home in my Grove for a while now.

The Grove that I (used to?) work in most frequently is a lovely little spot down in the conservation land bordering our village. There are actually two rings of trees, the inner consisting mainly of maple and birch, the outer of red oak and white pine.  I’ve been visiting, meditating, and performing ritual here for over three years now. Yet in the past few months, I’ve only been feeling tolerated instead of at home.

The sense of displacement so strong yesterday that I didn’t say more than a quick hello before moving on. It wasn’t that I was unwelcome, per se. It was more like a shoe that you’ve worn too long and has started pinching your toes.  Part of me wonders if the changes I’ve been experiencing in my inner grove are now manifesting externally.  It will still be a great place to hold public celebrations, but we’re no longer in sync when it comes to my personal path.

I continued walking through the forest. I had Ovate work that I needed to do, Grove or not, so I let my feet pick their own direction, over the muddy gullies, up a ridge and back down to the brook. When I came to the bridge, my breath caught.

I’ve crossed this bridge many times before. I’ve dangled my legs over the edge, listening to the brook and making blood sacrifices to the mosquitoes. It’s not a particularly amicable spot–no trolls lurking, but not all buddy-buddy either.  I expected the usual taciturn grumble. Today was…different.  There was an inevitable acceptance that’s hard to articulate, like the boy with his finger in the dike finally got hungry and went home.

Filing this experience away for later, I continued on the track that leads to the white pine grove. When I first began walking these woods, the grove was frankly just this side of terrifying. Dark, with creaking limbs and swampy bogs, the grove was something I passed through as quickly as possible.  If it didn’t like me, that was just fine, but I would still leave a token or offering just to be polite.  Because, you know, manners still matter.

The entrance to the grove itself is marked by two huge white pines, whom I’ve nicknamed Gog and Nagog (a play on the oaks trees Gog and Magog at Glastonbury, and Nagog Pond, MA, the hill above which was said to hold the four winds).  Unlike the rest of the grove, these twins are downright jocular, even chatty.  I think they like playing pranks on hikers in particular, as there are a couple of paths whose location seems to move if you’re not very familiar with the geography.  They are a pair to be reckoned with, and it’s little surprise that I’ve always slipped them a little something to stay on their good sides. If trees could be Goodfellas, I think I’ve now met them. 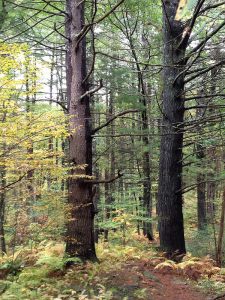 As I passed between them, I could almost feel Gog and Nagog smirking. (Yes, trees can smirk.) The day was overcast, and I had slipped out for the hike in between showers. The pine needles were soft under my feet, highlighted here and there by the pink autumn leaves of Virginia creeper vines.  Everything smelled wonderful, and I was filled with a sense of life and well-being.

That was when the damned sunbeam hit me right between the eyes.

You want to talk about Awen? That was Awen. Right-smack-in-the-face, full-singing Awen. The only sun we’d had all day, penetrating through the thick foliage of the grove to shine on me in a way impossible to ignore. I began chanting the ogham Ailm as the wind rose around me.

Just to double check, I went to ask Bog Mama’s permission to study amongst her children. She’s a wonderfully supportive tree, earthy guardian of the inner part of the Grove, as much as Gog and Nagog are the watchdogs of the outer part.  Nothing happens in this part of the forest without Bog Mama knowing about it. Touching her bark, I felt the deep and contented hum of her assent, though she clearly conveyed that she did not want to be part of any circle I established (the poison ivy that creeps across her feet emphasized this point).

For the first time, I really began to look at the land in the grove, rather than pass through the kill-you-and-eat-you atmosphere as quickly as possible.  What I had perceived as a few randomly placed farmer’s stones could become, with a little love, a right proper stone circle. I whipped out my compass to double check things.  Stones stood in the NNW, WNW, and SSE.  The waters of the brook were now in the east instead of the west as they were in the maple grove, but that’s not anything insurmountable (I’m one of those folk who changes directional correspondences depending on what’s actually going on in the land around me).  There was even a y-crossroads within the grove itself, a place where all manner of spirits might gather.  Finally, the symbolically-significant entry into the grove by crossing first the stream and then passing between Gog and Nagog can’t be beat. I need to sit more with the space to see what the other spirits of the grove might have to say, but I’m encouraged that this will be a fruitful place in which to finish my Ovate studies.

I’m more than a little sad at moving out of my old grove.  It treated me very well and I learned a lot there. Yet the change feels good and needed. Soul-deep.  White pine bears the title “Tree of Peace.”  I hope that I may find such and share it well beyond the grove.

5 thoughts on “Lost and Found”