New York City has always been something of a touchstone for me, so I decided to make a pilgrimage to three spiritually significant spots: St. Patrick’s Cathedral, The Metropolitan Museum of Art, and Central Park. This is the final post in the series.

I had actually intended to avoid the park. Stories of muggers and rapists crowded my brain as I left the museum, enough so that I crossed the street to walk in the perceived safety of 5th Avenue doormen.

Then I heard music. (Fairy music, perhaps?) Thrumming base notes and a pop/rock wail spilled through the trees and over the low stone wall. As I crossed East 66th St., my curiosity finally got the better of me and I followed the road towards the melody.

There is something romantic about the park at night. No longer gas lights, but the glow of the street lamps and strains of music gave the towering trees an otherworldly glow.  These trees, for the most part, like people, or are at least very tolerant of us. They’ve grown up with humans, and their branches bend protectively over the paths.

But there are human ghosts in the park, too, not all of them so happy.

An irregular terrain of swamps and bluffs, punctuated by rocky outcroppings, made the land between Fifth and Eighth avenues and 59th and 106th streets undesirable for private development. Creating the park, however, required displacing roughly 1,600 poor residents, including Irish pig farmers and German gardeners, who lived in shanties on the site. At Eighth Avenue and 82nd Street, Seneca Village had been one of the city’s most stable African-American settlements, with three churches and a school. —Blackmar and Rosenzweig

I stopped and spoke a while with a sycamore, a leopard tree with peeling bark.  Sycamores are the guardians of this place, more so than any other species.  She was gentle, somewhat amused and muzzy as she prepared for the winter. A piece of her bark cracked off and fell at my feet as we spoke, her gift to a traveler far from home. 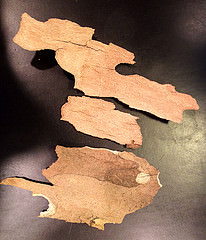 One melody gave way to another as I continued south, from Indie Pop to protesters’ drums. Along Central Park South, I noted a small fountain. City planners it seemed still had some classical education, public water being essential to the designs of so many ancient and medieval cities. The water for NYC, in fact, comes from miles away, through aqueducts in the Catskill Mountains.  Like Rome, 95% of NYC’s water gets there by gravity, rather than having to be pumped into the city.  The fountain was in the shape of a stone trough–perhaps it had watered horses in days gone by. 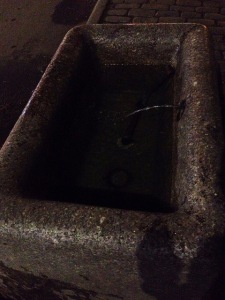 I dipped my fingers into the stream, offering a final prayer of thanks as I laved my forehead, lips, and heart. Blessed by tree and water, and by the fire of music, I made my way down through the protesters, and home in the false dawn of a NYC night.