Just when everyone is sick of Halloween posts in the blogosphere…here we go! 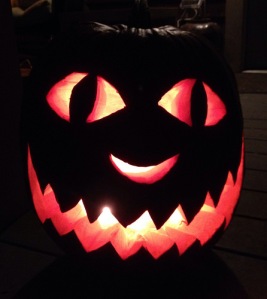 Samhuinn and Alban Arthan are the two holy times that last more than a single day in my personal practice.  I’ve written about my extended Alban Arthan celebration before, but Samhuinn has been developing more slowly.  This year feels like it finally settled into a nice seven-day festival of ancestors and witchery.

October 30th: Pumpkin Night. Yeah, haven’t figured out a better name for this one yet. Basically it’s ritualized decorating and laying in supplies for Samhuinn itself. However, I’m much more likely to do it if there’s ritual involved! We have a small, tight knit neighborhood, so several household provide baked goods (even gluten free, dairy free versions!) for Halloweeners.  Definitely something I’d like to do for next year.  But this year was ritual prep, the brewing of Fire Cider against winter colds, dipping dried mullein in beeswax for tapers, and the annual Carving of the Pumpkin (which weighed more than my four-year-old).

October 31st: Hunt’s Night. (And trick-or-treating if you have wee ones who engage in such shenanigans.)  After the kiddo is in bed, then the witchy fun begins!  The 31st begins a week of Wild Hunt work.  This has also been Cerridwen’s festival in my liturgical calendar for the past couple of years, but since Hekate has reasserted herself (as has the weird Rhiannon/Macha hybrid I’ve been wrestling with of late–more on that later), this may be the last time that I honor Taliesin’s mother at Samhuinn.  I’ve spent a year brewing the Awen under her guidance at the full moon, and I will likely continue with that devotional pattern.

November 5th: Guy Fawkes Day/Bonfire Night. The last night of lighting the jack-o-lantern–he goes in the compost heap or chicken run on the 6th. It’s also the last night of “official” Wild Hunt work for this season.

I left Samhuinn feeling very anchored in myself and my practice.  Which is a damned good thing since the next night was the full moon and the last part of the Cauldron Born rite that I started back in November of 2013. That, dear reader, is a tale for another time.