This past week has been one of splendiferous adventures in plant identification.  My best friend recently introduced me to the New England Wildflower Society’s plant ID website, and it has been so much fun tracking down all manner of flowering plants.  Blooming this week in the Assabet River bioregion, we have Common Cinquefoil, White Campion, Motherwort, Sweetfern, and Horsenettle.

Motherwort set me off on this journey of discovery.  You see, there was this strange little seedling in my garden plot this spring, but it looked so purposeful, that I talked with my row partner and we decided to leave it and see what happened. Now, she (the mystery plant, not my row partner!) is about two feet tall and happily feeding the bees. Motherwort is also a friend to humans, especially women, with many useful medicinal properties. We’ve decided to transplant her to the community herb garden, marking her with a sign as medicinal.

Common cinquefoil (Potentilla simplex) was another little mystery flower that had been bugging me this year.  Some sources claim cinquefoil as a fairly common medieval spell component, I’m guessing because the five finger leaves are reminiscent of hands. It’s astringent, antiseptic, soothing for the skin, and the powdered roots can be used to stop bleeding. 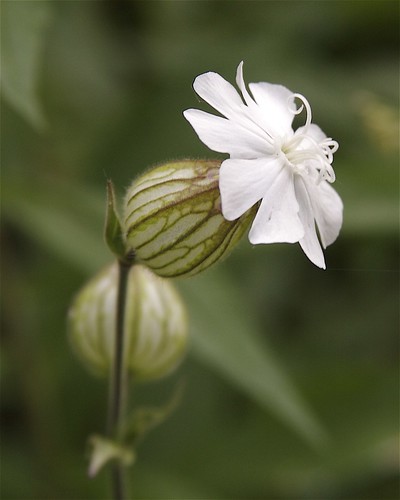 Every year I forget the name of White Campion (Silene latefolia) and have to look up. Maybe this year it will finally stick.  While it doesn’t have any medicinal uses, being high in saponins (much like quinoa), simmering the root will create a sort of soap. And, it’s just plain pretty to happen upon in the meadow.

Sweetfern is one of the first plants I got to know when I moved to my current home. It is very much associated with poor soils and stands of pine, both of which happened to be abundant on our property. Sweetfern can make a very nice tea and be useful in a variety of ailments, especially as an astringent. I’ll likely be harvesting it this year to experiment with as an insect-repellent incense. 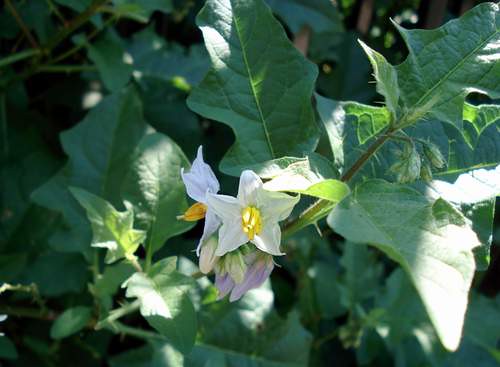 Horsenettle is a member of the nightshade family–Solanum carolinensis to be specific. It’s often classified as a noxious weed, and I’ve had trouble finding any constructive use for it (if someone in the audience knows of one, leave a comment!). It’s the only member of the Solanums that has thorns, which makes its removal particularly tricky.

Lastly, I helped my father identify this little fellow as Sheep Sorrel, a member of the vast dock and sorrel genus. It’s been driving him crazy in the garden, as it sends its roots right underneath other plants and makes it extremely difficult to remove. He noted with some dismay that it doesn’t even have the decency to wilt after it’s been picked!  On the bright side, it is edible, and lens a lemony flavor to salads and soups.

I’ll be harvesting the Motherwort and Sweetfern, along with Mugwort, Agrimony, and Feverfew over the coming days.  I’m finally feeling like I have enough a) reading knowledge and b) glass jars to try making tinctures.  Agrimony is one of the things that keeps me from turning into an absolute badger in March/April when Seasonal Affective Disorder seems to hit me hardest.  I’ve made tea from the dried leaves in the past, and have taken a commercial tincture, but I’m looking forward to trying some of my own brew.

Oh, and the first blackberries are also ready to pick.  Just one more reason to love the Solstice season!