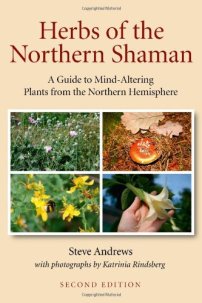 Herbs of the Northern Shaman was an extremely frustrating read. It’s unclear whether the cause of that frustration can be laid at the feet of the author for writing a book with so much potential that then fell short, or at my own for expecting too much.

What I expected: a detailed catalogue of northern European plants, with explanations of habitat, identification, dosages, and related ritual contexts.

What I got: a catalogue of plants quite literally above the Equator, with inconsistent descriptions, artsy photographs often useless for identification, no information on preparations or dosages, and no mention of appropriate ritual contexts. There are no citations for the authors various assertions, such as “It [Fennel] was once used by the Romans to increase stamina and courage” (p. 41).  Oh, really?  That’s nice, where’s your source?

In addition, several species are included from the Asian continent. At the risk of appearing blatantly Eurocentric, CM herbal preparations are not something I’m particularly interested in, and their inclusion frankly felt jarring. They are technically not outside the bounds of the book since it includes all of the northern hemisphere, but Andrews makes no mention of Chinese culture or traditions in his introduction. If Asian traditions are going to be included, own them up front with the rest of the cultures mentioned in the introduction (Nordic, Russian, Celtic, and Native American), which by themselves lead the reader to assume a European/North American expectation for the species covered.

Another problem is that many of the entries are included because there are compounds in the plants that are known to be psychoactive, but there is no evidence or experience of them being used historically or currently in a ritual or shamanic context–if that’s the case, why include them?  For example the entry on Meadow Buttercup:

According to author Gareth Rose in his booklet The Psychedelics, early Chinese literature states that a flower that grew by streams and brooks could cause delirium…Some authorities [who?] feel that the herb referred to is the common species of Buttercup.  Far more investigation is needed to confirm whether or not the species described actually is the Meadow Buttercup, as the leaves of this type are not really “rounded”. (pp. 15-16)

So, an unverified herb from China, asserted to be a Meadow Buttercup (R. acris) by some unknown “authorities”, may or may not have psychoactive properties. Just how, exactly, is this information either relevant to the topic at hand? In Andrews’ favor, where he does have experience with a particular plant and its effects he details them.  It’s just that those little jewels are few and far between–the exception being the 7-page love letter to Cannabis  (when most entries are 1 1/2 pages at most), which nearly resulted in the book being thrown across the room.

The bibliography does have a few solid sources in it, such as Culpeper and Grieve, and frankly one would be better served in many ways to consult these books directly. There are a couple of other useful titles included there that I may add to my reading list. It’s a fairly “old” bibliography, however, most of the books being from the 1990s or earlier.

I’m more than a little uncomfortable writing this, as I received Herbs of the Northern Shaman as a review copy, and I very much would have liked to give it a good one.  The best I can say for it is that it can serve as a starting point for shamanic herbal exploration. However, to expect anything more of it is to invite disappointment.

4 thoughts on “Books Read 2015: Herbs of the Northern Shaman”