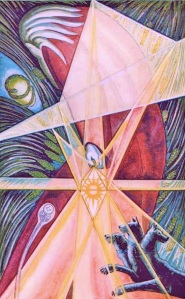 And now, Practical Patronlessness! (boy did spell-check have fun with that one!)

Last time, I rambled on about my own history with various gods, which can give the impression that I went through divinities like chewing gum.  But as much as I would have liked, no matter how valuable the wisdom gained from these gods, none of these relationships would head in the direction of patronage.  The key distinction separating a patron from a guiding deity is that a patron is a being to whom you have oathed service.  A guiding deity, on the other hand, may be present for a few months or even a few years, but ultimately does not demand a permanent relationship.

This being said, there are a number of strategies that I’ve found fulfilling in dealing regularly with Gods who are not ever going to be patrons, but who are still deeply influential in my life.  A few of the key ones are:

1) Work with the Gods of the season—and don’t fight the change. Some Gods just aren’t meant to be around 24/7.  They have specific times when they are most manifest, and trying to work with them outside of these times can be frustrating at best and futile at worst.  An example from my own life is my relationship with Gwynn ap Nudd.  I can only perceive him from Samhain to Betaine, which at first I found rather disconcerting as he is quite a powerful influence during the dark half of the year.  But after doing a bit more research into his lore, it became clear that this is one of his characteristics—not something to be distraught over, but something that can be celebrated.  Another example is that of Apollo, who in Greek mythology vacations during the Winter in the North with the Hyperboreans.  Our Gods are not omni-present.  Give Them the vacations They deserve!  And don’t blame yourself for dry spells that may be perfectly natural.  All things in nature have times of rest—the only thing that grows without ceasing is cancer.

2) Stick with the same pantheon (or blended pantheon) at first.  I know, after reading that last post that sounds a bit like the pot calling the kettle a soot-covered cooking implement.  While I really bridled at this advice when I first heard it, after a bit more practical experience I think it is quite wise.  By honoring a single family of gods, it allows one to really discriminate as to whether the input one is receiving is real or a product of ego.

Usually if a person then finds a god from outside their chosen pantheon making an appearance, it will more often than not be from a culture that neighbored the one of their main pantheon.  So, in my case, occasionally honoring Welsh gods isn’t that much of a jump from the Anglo-Saxons since they were geographically (if not temporally) related.  I think the same argument can be made for many of the cultures that bordered the Mediterranean, such as the Greeks, Romans, and Egyptians.  Plus, all of these cultures were notoriously syncretic, absorbing cults and gods as benefitted their communities.

3a) A few “authorities” have asserted that if one does not have a patron, one should not engage in Otherworldly work.  Personal experience has shown this to be nonsense.  It is certainly more difficult—if one is mystically inclined–to not have a steady, reliable source of advice about the Otherworld.  However, this is fairly easy to compensate for by acquiring other allies and using a little common sense.

So study. Really hard. When I need advice or guidance about some of the places or beings I encounter while journeying, I consult rather  mundane sources like folklore anthologies.  Understanding the mythic landscapes of various world cultures helps tremendously with Otherworldly work, giving insights to the nature of many beings whom one can meet.

3b) Work with the spirits of place. Often times, the land wights will offer as much or more information about working in a certain area than a larger god.  Keeping it small and intimate can produce surprisingly fruitful results.  So, there are in fact a number of ways in which a pagan without a patron can still safely participate in some of the more esoteric aspects of the polytheistic experience.

While I originally titled these two posts “Walking Alone,” in fact there could be nothing further from the truth.  There are a myriad of relationships one can develop with Gods and spirits outside of the sometimes narrow definitions of patronage.  It may require a bit of creativity and a willingness to seek other sources of guidance, but I believe it can be done.

The moral of the story is, slow down.  Don’t be in a rush to find a patron.  And don’t feel as if you’re a pagan failure if you never enter into that sort of relationship.  It takes all kinds to bring back the worship of the Land Powers—embrace whichever role comes to you and be proud of it.