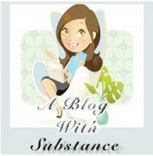 Wow, my very first blog award!  Innumerable thanks and congratulations go to Siggy for her own nomination.

Here are the rules:
Say ‘thanks’!
Chose 5 words that sum up your blogging philosophy.
Pass the award on to 10 others.

I’m also going to pass the award on to 5 rather than 10 others, as some of my favorites have already received the award:

Witch of the Forest Grove

The Gods Are Bored

I’ve been on something of a hiatus for the past few months during my crash-course with motherhood.  So hopefully I can resume some sort of semi-regular posting in the upcoming weeks.  Three months is not only a huge milestone for the baby, but for the parents as well.  Sleep-dep has now become a way of life, and is no longer the taxing experience it once was!