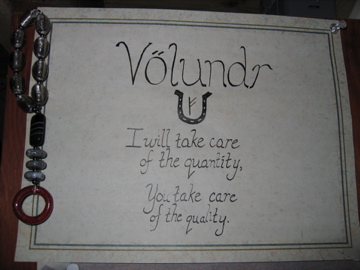 2. How did you become first aware of this deity? As seem to happen with most incidences of Deity Awareness Syndrome, Wayland first presented himself through a rapid series of synchronicities.

At the time he first showed up on my radar, I was working on the OBOD Bardic Grade, but was feeling pulled towards the Germanic/Norse pantheon(s). This was causing some amount of cognitive dissonance, as OBOD lends itself a bit more to all things Celtic and British. I had also been working my way through the exercises in The Artist’s Way, by Julia Cameron. One of the exercises was to make a deal with God/Godess/Spirit etc. to open up creative flow. The assignment was to make a sign to hang above your workspace that said, “I will take care of the quantity, you take care of the quality.”

Within a few days of reading this chapter of The Artist’s Way, I also read the Lay of Völundr in the Poetic Edda. I was inspired, and I knew this was the god whom I would invoke on my sign. I researched his symbols and chose a combination of a horseshoe and Feoh* (for creative abundance). I also bought a small anvil and kept it on the stained glass workbench.

His approach was quiet, more like a slight pressure in the base of my spine, or a tingling in my hands. Then one day, I because completely flummoxed as to how to solder a certain piece. And then he was there, guiding my hands and literally putting pictures into my mind of how I needed to better manage the heat of the iron and use more flux in just these places, and…

…how the act of soldering stained glass together was the same as the process of reconnecting my heart to my mind to my soul. Different pieces, all beautiful, but so much stronger when taken together.

Later, when I was feeling pressure from the larger Heathen culture to choose a god to whom I would oath, I approached Wayland. He was kind, and with a shake of his head and a funny smile said, “Why would you want to oath to your family?” At the time I was crestfallen, thinking that he had rejected me. Yet his presence never wavered and it because clear the our relationship was one beyond sworn fealty. He would teach me and I would dedicate my acts of creative creation to him. No oaths needed.

Tomorrow: Symbols and icons, or “If I Had a Hammer.”

*I now associate Kennaz with Wayland, and would use this instead should I ever remake the sign.