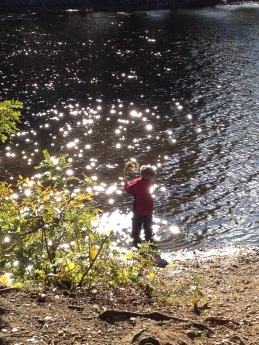 I’ll be the first one to admit that I’m no theologian. In my youth, those Big Questions–our place in the universe, the nature of the gods…all the mysteries that one sits around discussing at 3 AM in a dorm hallway, noshing on Ritz crackers and EZCheeze–well, frankly, there was a lot more room in my life to think about those sort of things back then.

The one question that I keep returning to, though, is why do the gods help us? Do they in fact help us?  Sometimes it’s not even clear if they are helping us, or whether there has just been a massive set of coincidences that look like god-fingerprints to our pattern-seeking primate brains.

When I’m in more of a gods-as-archetype paradigm (which, for the record, is a place I do not enjoy), I wonder if we simply draw strength from the examples set forth in their stories?  Taking this perspective certainly eliminates the question of why do they help us, since there is no objective “they” apart from ourselves.  Yet I feel that this is sidestepping the question, avoiding potentially difficult answers in favor of the safety of psychological explanations.

Some believe the help of the gods flows from a natural, reciprocal exchange between humans and the unseen world. It’s a very Capitalistic way of viewing things: I pour out 12 oz. of mead and you’ll give me a new car, m’kay?  No?  How about 36 oz.?  Ok, so I’m applying a touch of hyperbole here, but I do think this sort of exchange is not as cut and dried as it is often represented. A gift for a gift is a good rule of thumb, but sometimes divine aid comes for unasked, and sometimes human praise gives freely without expectation of reciprocation.

So why then? Why do the gods help us? Is it because they’re good? That’s the approach Christianity has taken. The notion of Grace is not one generally espoused in Neopagan circles, but in many ways, it neatly circumvents the “why” of a deity’s help. But there’s the sticky fact that polytheist gods are not always good.  Maybe they are sometimes, yet our gods can be just as fallible, untrustworthy, greedy, and hate-filled as any human. If it is Grace we receive, then it is because our divinities are in a moment of Grace themselves–which then beg the question, who gave it to them?

Most often, pagans and polytheists state that the gods intervene because we are part of some metaphysical machination beyond our own understanding. I tend to feel that this is a much too human-centric, egocentric view of things, though I have certainly fallen back on this explanation myself. There has been at least one instance where I have perceived the direct intervention of deity in my life’s path. Aranrhod metaphysically bitch-slapped me back in 2005 in order to get me out of a potentially abusive situation. She may not have been the nurturing Mother that I wanted in that moment, but she was definitely the Mother that I needed. Why she chose to do this is still a mystery to me. I’ve asked her, but received nothing more than a knowing smirk.

Does any of this matter? Probably not, in the end. Yet I think taking the time to struggle with the question is an important part of any spiritual/philosophical development. The best I can come up with is this: Maybe, just like a person putting a baby bird back in the nest, the gods just want to help out a little bit. Maybe we will sing sweetly for them, maybe we will get eaten by a cat a week later, but in that moment, perhaps an act of kindness and compassion can be enough in itself. Both for humans and for gods.