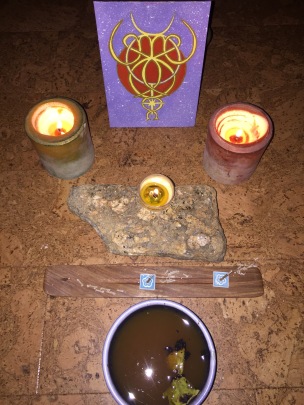 As those of you who have read this blog for any amount of time know, I’m a big fan of Jason Miller’s Strategic Sorcery materials.  One of the nice things is that once you’ve signed up for the course, you will get invitations to participate in world-wide rituals, usually focused on some sort of planetary energy.  A few days ago, I received a PDF with instructions for a global Mercury rite to be performed between July 29th and August 1st.  So after getting Hufflespawn  to bed, I read through the ritual and decided to stretch the ol’ magical muscles.

One of the things I really dig about Miller’s rituals are that they’re pretty flexible and can easily be combined with other paths and traditions–or perhaps that’s also a function of OBOD rituals and the two just complement each other nicely.  I tend to set up an OBOD grove initially, then move into Miller’s script for the main event–and of course add herbs and spices as desired!  (‘Cause magic really is like cooking–it’s not your recipe until you fiddle it to your tastes.)

I waited until 9:44 PM, the beginning of the hour of Mercury, on the Day of Mercury, to start the rite.  The Moon was in Capricorn, and waxing/almost full, which should lend a more mature and stabilizing influence to all that Mercury energy flying around.  For offerings I used cinnamon incense, dried Nicotiana sylvestris from last year’s garden, and apple cider.  I set up the circle with eight beeswax candles and my own personal Mercury sigil, in addition the to usual ritual paraphernalia.

A couple of immediate takeaways:

Definitely another ritual for the every-growing grimoire. I’m looking forward to whatever Mr. Miller chooses to tackle next.

One thought on “Global Mercury Rite”