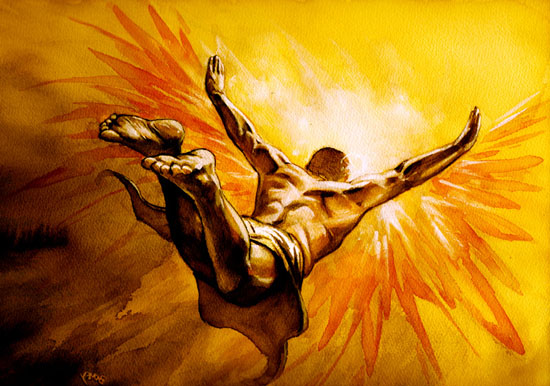 28. Something you wish you knew about this deity but don’t currently.  Like a lot of archaeologists, I suspect, I wish I knew what the ancient Anglo-Saxons thought and felt–I want to know the people behind the material remains. By extension, I wish I knew just how Wayland was honored, if at all, in his native cultures. Was he someone invoked in passing as the village smith began shoeing a neighbor’s horse? Was there a more established cultus with a permanent temple area similar to those found in Greece and Rome? Were there priests of Wayland, or was he more of an ancestor invoked by the common folk to tame their fires and aid their crafts? There is so much lost to the past. Even our best guesses are likely to be miles removed from the motivations of an ancient people.

I also wish I knew what happened to Wayland after he escaped, Daedalus-like, on wings of birds slain by his brother. Did he, as some later stories claim, come back for Bodvild and her child? Did he abandon them? Did he return to his home on the shores of the lake to craft another 700 rings as he waited for Hervor? Or did he fly to his swan wife on wings of his own making, to reunite with her at last?

Perhaps all these things are true. Or perhaps none of them. I just wish I knew.