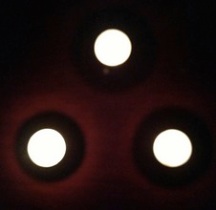 One dot, that’s on or off, defines what is and what is not, one dot
Two dot, a pair of eyes, a voice, a touch, complete surprise, two dot
—”Growing Up” by Peter Gabriel

First there is One. Then One recognizes herself, and there are Two. The second, by its nature, is now separated from the One; thus Two is the source of all further differentiation of the One.

As each studies the other they are drawn together. Gazing at one another, One cannot help but see something of herself in Two, and likewise, Two also sees something of himself in One. Two and One find they complement each other perfectly.

And from this union Three is born.